What others are saying about us

Neon lights glow purple, illuminating large globular glass flasks filled with different coloured liquids. A brightly lit metal counter is arrayed with bottles and test tubes. Behind it on one side are stainless steel drums; on the other, oak barrels.

Marina Milić is using a pipette to carefully decant and measure out liquids into tasting glasses, ready for me to try. It looks like a cross between a laboratory and a cool downtown bar and, in many senses, that’s exactly what Belgrade Urban Distillery (BUD) is: a meticulous small-batch rakija distilling operation open to the public for tastings and cocktails. Yet to most Serbians, hipster BUD couldn’t be further removed from how they imagine a rakija distillery to look. And that’s exactly the point.

Traditionally, rakija is a spirit made from fermented and distilled plum juice (Serbia is the third-largest plum producer in the world, with 42 million trees) by Serbia’s old folks in the countryside. Because of this association, younger Serbs were ignoring it and favouring spirits like vodka instead. 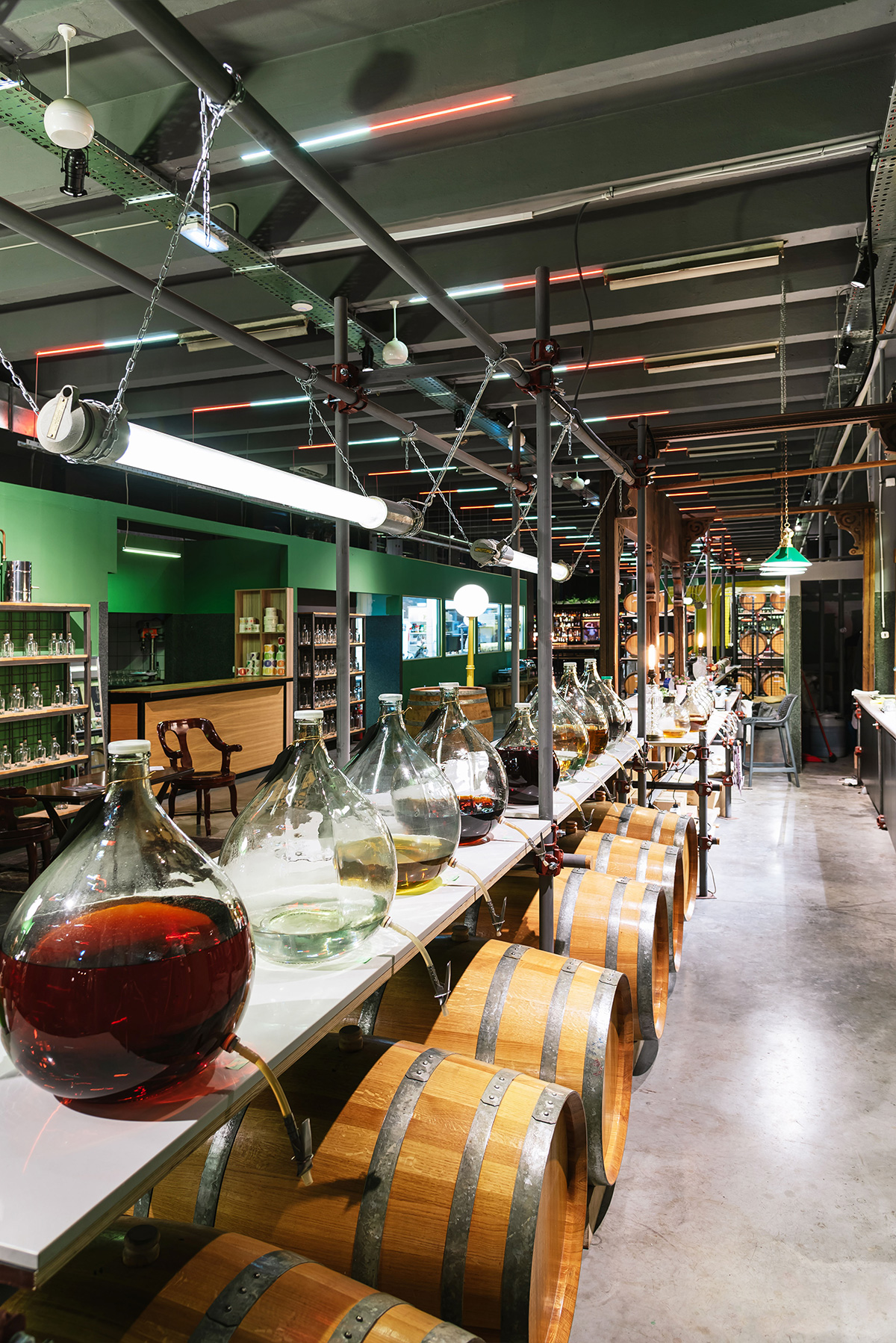 But Branko Nešić, BUD’s founder, grew up drinking rakija in the city’s kafanas – old school bistro-slash-pubs where old men trade stories and listen to live music. He knew that although some kinds of the spirit could blow your brains out and give you a killer hangover, there’s also good quality, artisanal rakija to be found, and the country’s younger generations were missing out. As Milić is at pains to explain.

“Vodka can be made with grain or any kind of potato, but we only use good quality fruit – the kind you’d be happy to feed to a baby. It’s of a much higher quality.”

Since people usually made rakija in their grandfather’s village, Nešić decided to do the same. It just so happened he and his

grandfather are both from Belgrade’s city centre neighbourhood of Dorćol. Nešić started serving his spirit in a dedicated rakija bar, and now makes it in the heart of the capital city in Serbia’s first urban distillery.

“In the villages, when people made rakija, they’d put it in a barrel and bury it in front of the house”

This was a sure-fire way of keeping the precious liquid safe. But you can’t dig up the pavement to hide your treasured rakija in the city, so the BUD team has created a ‘rakija bank’.

Demonstrating how it works, she pours samples of several different rakijas for me to taste. As well as classic plum rakija

(šljivovica) – there’s quince, apricot, apple and pear, as well as barrel-aged versions, editions infused with honey and herbs, and rakijas that have had more fruit added to make them into liqueurs.

Milić lines up a new-make (the stuff that comes straight from the still) quince spirit which, at 60%, is eye-wateringly punchy; a standard quince rakija, which is clear; and then a premium quince rakija, turned gold from time spent aging in a barrel. Each has its own qualities, and the three can be blended in different ratios to make a drink to your own personal taste.

Once I’ve settled on my blend (I experiment with an apricot and a plum version), Milić mixes it up at scale and advises on the size of barrel and length of time needed for aging to get the best flavour. Unlike whisky, rakija shouldn’t mature for too long; šljivovica can stay the longest in barrel, for up to three years.

Once it’s in the barrel, you make and seal it with your own stamp so only you can open the barrel. When you bottle it, you can personalise the labels too,” Milić says. “We call it a bank because every year it’s aged, the rakija increases in value by 30%.”

Now even those without a country-based ancestor can honour this ancient tradition with their own bottling. But perhaps the proof of BUD’s success is in the opinion of a previous generation of rakija experts. “When I started working here, my dad told me that he’d been making rakija for 20 years and that I couldn’t teach him anything he didn’t know,” Milić laughs. “After all, people make it the way their father and their grandfather and their great-grandfather before them did, and they’re certain it’s the best. But now my father knows how good our rakija is, he’s even started asking my advice!”

Regardless of how 21st century the distillery looks, or how scientific the process, whatever the blend you make, or what you name it, for Serbs, it seems there can be no higher praise than a parental thumbs-up – a rakija barrel’s ultimate seal of approval.

In our distillery, you can taste and buy any of the drinks that we make.

A part of the concept is our restaurant of national and international cuisine.

More about the restaurant

Our cocktail bar is a small hedonistic time machine, within the distillery.

BUD is the first open-type craft distillery in Belgrade where you can find more than 20 types of rakia (fruit brandies) and liqueurs,
produced in a small batch. Follow us on social media: